Randy Esklelson is a lucky man.  In August of 2017 his wife called authorities after finding him unconscious.  He had no brain activity when he reached the hospital. Family members told the Maricopa County Sheriff  they believed Randy had been poisoned.  Subsequent testing found a potentially lethal dose of ethylene glycol, an active ingredient in antifreeze, in his system.  After a month’s long investigation, detectives identified several purchases made by Connie Eskelson, Randy’s wife, for “lab-grade” ethylene glycol.  Thankfully, Randy made a full recovery.  “I firmly believe that my wife of 34 years tried to kill me with ethylene glycol,” he said in a court statement released Friday. “There is proof that it was bought by her and proof that it was delivered to our home.”  Sheriff’s detectives believe Eskelson spiked her husband’s drinks “on a daily basis” with the substance, officials said. 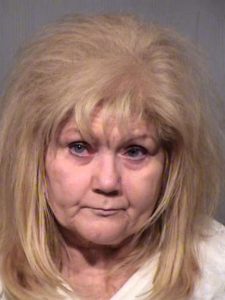 Connie was arrested and charged with attempted first degree premeditated murder.  Randy says he does not know why his wife would try to kill him.  However, he stated he does believe she would try again to kill him if she’s released.  Fortunately for Randy, Connie Eskelson has been deemed a flight risk, according to a probable-cause statement submitted to a court by the Maricopa County Sheriff’s Office. Officials discovered she had been using four different names.  Her bond was set at $1 million dollars.