As more and more people are looking for gluten free options, rice is gaining in popularity.  But you might want to think again.  Far more worrisome than gluten is the arsenic in rice.

Rice is THE leading contributor to arsenic in the diet

And the type doesn’t matter.  White, brown, wild, organic–it all contains arsenic. Enough arsenic will kill you, but small amounts over time increase the risk of lung, bladder and skin cancer along with heart disease and possibly type 2 diabetes. Organic arsenic is a naturally occurring compound that is in our water and soil. Inorganic arsenic is added to the environment by the use of pesticides and poultry fertilizer. Rice grown conventionally in paddies flooded with water absorbs the arsenic more than any other grain. High levels of arsenic have been shown to cause cancer and other diseases. Studies done by Consumer Reports in 2013 on the amount of inorganic arsenic—a known carcinogen– in rice showed that one serving a day of rice cereal or one rice cake would put children over the limit for the amount of arsenic they should have in a week. Rice drinks shouldn’t be given to children under 5 at all. And the FDA now recommends that parents “should consider options other than rice cereal for a child’s first solid food.” In fact, the FDA has proposed an action level, or limit, of 100 parts per billion (ppb) for inorganic arsenic in infant rice cereal.  The International Agency for Research on Cancer classified arsenic as a category 1 carcinogen, meaning it’s known to cause cancer in humans. The U.S. EPA has also determined that inorganic arsenic is carcinogenic to humans.


So what do you do if you want to go gluten free?  There are better options: 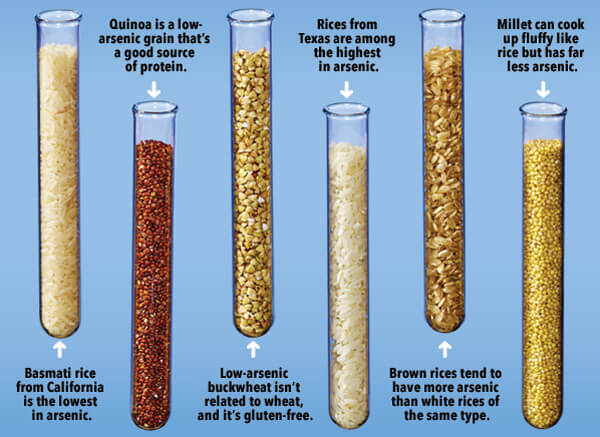