Listeria laden Enoki mushrooms are believed to have caused the death of four people and the hospitalization of 30 others.  Sun Hong Foods has recalled the mushrooms, but it’s perhaps too little too late.  According to the Centers for Disease Control (CDC), 36 reports of listeriosis have been reported across 17 states.  “Do not eat, serve, or sell any recalled Enoki mushrooms distributed by Sun Hong Foods, Inc.” the CDC said on its website. The deaths occurred in California, Hawaii, and New Jersey.  Six of the cases involved pregnant women who are among the most at risk for listeria poisoning.  Two miscarriages are attributed to the infection. The mushrooms are labeled “Product of Korea” and were sold in 7 ounce/200 gram clear plastic packages with a green label.  The mushrooms were shipped to California, Texas, Oregon, Washington, Illinois, and Florida.

There are many different species of Listeria, but only Listeria monocytogenes is known to call illness in humans.  The infection, Listeriosis, has a variety of symptoms depending on the person and the part of the body infected, and can take one to four weeks to appear.  This is why is it so difficult to diagnose.  Listeriosis symptoms can include diarrhea, fever, fatigue, muscle aches, headaches, loss of balance, and convulsions.

Pregnant women are 10 times more likely than the average person to get a Listeria infection.  Pregnant Hispanic women are 24 times more likely.  The infection can be passed to the unborn baby, and can cause miscarriages, stillbirths, and premature labor.  However, more than half of all listeriosis cases are in adults over 65.  This is due to weakened immune systems and a higher likelihood to have other chronic conditions. 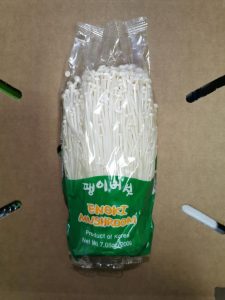