A new study by Yale School of Public Health researchers confirms that many carcinogens involved in the controversial practice of hydraulic fracturing or “fracking” have the potential to contaminate air and water in nearby communities. Air and water testing is exposing its potential hazards.

Fracking is now common in the United States. In 2000, there were about 276,000 natural gas wells in the United States. But by 2010, that number had almost doubled to 510,000, according to the U.S. Department of Energy (DOE). And every year, about 13,000 new wells are drilled. According to a 2014 study, at least 15.3 million Americans have lived within a mile of a fracking well that has been drilled since 2000. “Because children are a particularly vulnerable population, research efforts should first be directed toward investigating whether exposure to hydraulic fracturing is associated with an increased risk,” said lead author Nicole Deziel, Ph.D., assistant professor. Childhood leukemia is specifically a concern because of the severity and short latency period of the disease. The study is published in the journal Science of the Total Environment.

The team of researchers examined a list of more than 1,000 chemicals that may be released into air or water as a result of fracking. “Previous studies have examined the carcinogenicity of more selective lists of chemicals,” said Deziel. “To our knowledge, our analysis represents the most expansive review of carcinogenicity of hydraulic fracturing-related chemicals in the published literature.” 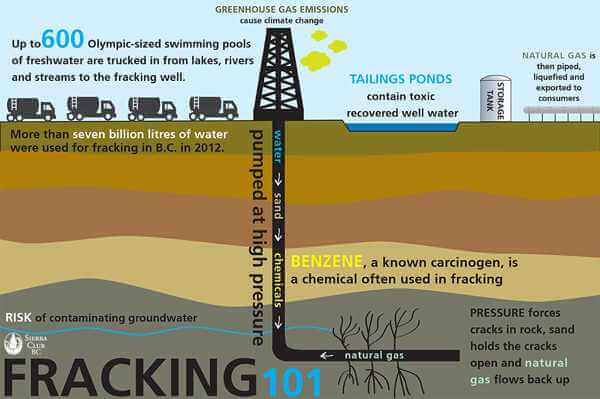 According to the air and water testing findings, about 80% of the chemicals lacked sufficient data on cancer-causing potential. Of the 119 compounds with sufficient data, 44 percent of the water pollutants and 60 percent of air pollutants were either confirmed or possible carcinogens. Because some chemicals could be released to both air and water, the study revealed a total of 55 unique compounds with carcinogenic potential. Furthermore, 20 chemicals had evidence of increased risk for leukemia or lymphoma.  Researchers from Duke University tested drinking water at 60 sites throughout Pennsylvania and New York; their research was published in 2011 in the Proceedings of the National Academy of Sciences. The researchers found that drinking water near fracking wells had levels of methane that “fell squarely within a range that the U.S. Department of Interior says is dangerous and requires urgent ‘hazard mitigation’ action.”

Fracking has increased significantly in recent years and the practice is expected to continue to grow in the future. The process involves drilling deep into the earth and releasing a high-pressure mixture of water, sand and chemicals that fracture the rock and release the gas or oil trapped inside. While fracking increases the production of domestic oil and natural gas and decreases prices, it is controversial because of the significant amounts of water that must be used and transported, as well as the release of carcinogens into the air and groundwater.

In addition to water quality issues, fracking wells release compounds into the air, such as benzene, ethylbenzene, toluene and n-hexane; long-term exposure to these has been linked to birth defects, neurological problems, blood disorders and cancer. The National Institute for Occupational Safety and Health (NIOSH) has found that workers may be exposed to dust with high levels of respirable silica during hydraulic fracturing. These findings were shared after NIOSH studied 116 full shift air samples at 11 hydraulic fracturing sites in five states.