How Does Infidelity Testing Work?

How does infidelity testing work? You’ve been suspicious about your partner’s behavior lately and wonder if they are having an affair but don’t know how to find out. Maybe you’ve found her underwear or sheets with signs of sexual activity. Or perhaps you’ve found stains in his car or on the furniture that can’t be explained.  Is there a way to prove your husband or wife is having an affair? How does lab infidelity testing really work? What kind of information can you find out?  There are two types of infidelity tests you can have done — semen detection and DNA testing.

Semen Detection — There are several varieties of semen detection tests, each looking for different substances found in semen. One type of test is an acid phosphatase or AP test.  Because the enzyme is produced in the prostate, it can be an indicator of the presence of semen.  However, it’s also found in vaginal secretions and other bodily fluids. Because of this, the test is considered presumptive and the most unreliable of all the testing options.  Further confirmatory lab testing is required on any positive results to rule out a false positive reaction.

The second kind of test is the PSA or prostate specific antigen test.  PSA is another protein produced in the prostate.  While some studies show PSA can exist in breast milk and urine, a positive PSA test is a strong indicator a stain contains semen. However, since there is still a chance of cross reaction, this test is not considered confirmatory or 100% reliable either. Again, follow up lab testing is required on any positive results.

Lab testing options are the only 100% reliable tests to confirm a stain is semen.  The Christmas tree test uses chemical reagents that color the head and tail portions of the sperm cells in different colors.  This works only if there are sperm in the semen.  If a man’s had a vasectomy, or naturally doesn’t produce sperm it won’t be able to confirm that semen is present.  Further testing is required.

Finally, there is the semenogelin test.  This test is very accurate and specific for human semen testing and will detect even diluted samples of semen, semen mixed with other body fluids or the presence of fungi or bacteria — in other words, the semen test will not cross react causing a false positive results.  For this reason it’s the test crime and forensic labs use to confirm that semen is present on a sample. It is the follow up test done on all the other presumptive test samples. 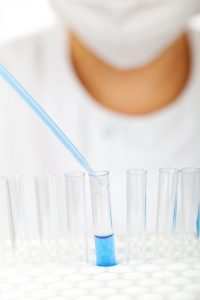 DNA in humans is 99.9 percent identical.  It’s the last 0.1 percent of the DNA profile that makes each of us unique.  Comparing those sections of the DNA that are different is how we determine if two samples of DNA come from the same person.  Unless you have an identical twin, the chances of another person’s DNA matching yours are a billion to one.  So just as in criminal cases, DNA infidelity testing compares DNA found on a sample to DNA from a known person.

DNA infidelity testing is the ultimate test for many who want to prove beyond a shadow of a doubt that their partner is being unfaithful.  There’s no denying the presence of DNA that doesn’t belong to you. If you’ve found underwear, clothing, panty liners, or tissues with signs of semen or sexual activity it can be tested for DNA.  It’s normally completed within ten days or so and can tell you if the semen or stain is yours or someone else’s.   DNA detection testing will determine if DNA is present and if it’s male or female or a mixture of people.   DNA comparison testing will tell you if DNA is present, the gender, and if any matches a sample you provide.  The comparison sample is usually in the form of a buccal or cheek swab, but many different items can be used.  No blood is required.

Semen detection and infidelity DNA lab testing are a fast, affordable way to find out if your husband or wife is having an affair.  Reach out today for more information.