Can you have iron poisoning? Many people wonder if they are getting enough iron in their diet. What we should be wondering is if we are getting too much. So many foods, especially baby foods, are “fortified with iron”.   Recent research shows that of 1000 people tested, 3 percent had an iron deficiency but a whopping 13 percent had too much iron in their system.

Iron is essential for life. It’s what makes our blood red. It’s essential for the formation of hemoglobin, the protein in our blood that carries oxygen throughout our bodies. Too little iron causes fatigue, reduced immunity, and anemia, which can be serious if untreated. But too much iron also causes a serious set of problems. Our bodies have difficulty getting rid of excess iron, so it builds up in our liver, heart, and pancreas. Long term excess iron is linked with cirrhosis of the liver, liver cancer, irregular heartbeat, diabetes, infection, and Alzheimer’s disease. Measuring the levels of iron in brain tissue has been suggested as a way to detect Alzheimer’s disease at its earliest stages. Research has also shown that people with high levels of iron are two to three times more likely to have bowel cancer. A main source of iron for many people is their drinking water.  Especially if you have a well. Test your water to be sure the levels aren’t causing problems. Iron poisoning can be dangerous and irreversible. 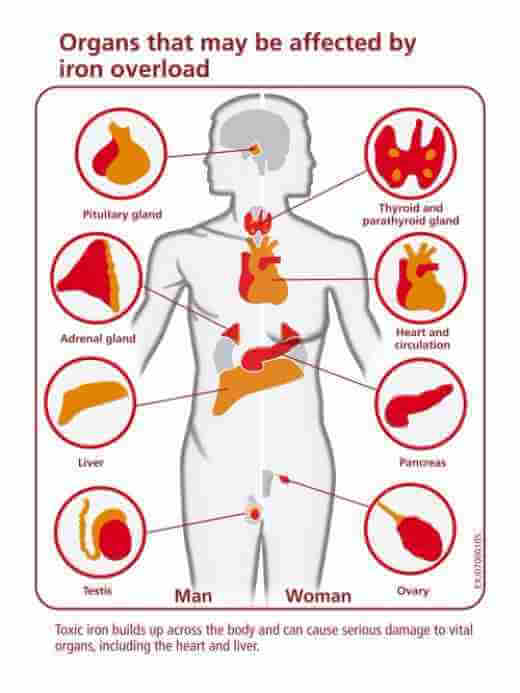 In America, about a million people have a genetic mutation that affects their ability to absorb iron into their bodies. They actually absorb too much and this leads to a disease known as hemochromatosis. Early symptoms are fatigue, weight loss, and joint pain. If untreated it leads to heart disease, liver disease, and diabetes. Having additional iron in the diet only adds to the problem for these people.

One way to reduce iron intake is to check the iron levels in your drinking water, especially if you drink well water. If you have staining issues in your sinks or showers, you probably have too much iron. Get it tested and protect yourself.