Listeria – A Danger to Unborn Babies

Contracting Listeriosis during pregnancy may be more dangerous than previous thought.   Listeria is a bacteria that is a known cause of stillbirth, miscarriage, and premature labor.  According to the CDC, an estimated 1,600 people get listeriosis each year.  Of those, about 260 will die. The infection is 10 times more likely to sicken pregnant women than other people, and 24 times more likely to infect Hispanic pregnant women. But scientists now say that it may be far more dangerous for pregnant women than previously known.  Because the symptoms of a Listeria infection, known as listeriosis, so closely mimic morning sickness, it may be going undiagnosed.  The study shows that this may be deadly for the baby.

Scientists gave monkeys a strain of Listeria known to cause stillbirths and miscarriages.  All of the monkeys’ pregnancies ended before the mothers even showed signs of being ill.  However, tissue samples showed that the bacteria was in the placenta and the lining of the uterus.  This means the infection was reaching the fetus, even though the mother wasn’t obviously ill.  This leads scientists to believe that miscarriages that seem to have no known cause may be the result of a Listeria infection. According to the study’s lead author Bryce Wolfe, “There are effective antibiotics available. It is treatable. The issue is that because it’s asymptomatic, the fetus may be infected by the time anyone realizes the mother was infected.”

Professor Ted Golos, a reproductive physiologist and professor of comparative biosciences and obstetrics and gynecology at the University of Wisconsin-Madison (UW-Madison) led the study.  He says that “For many years, Listeria has been associated with adverse outcomes in pregnancy, but particularly at the end of pregnancy. What wasn’t known with much clarity before this study is that it appears it’s a severe risk factor in early pregnancy.” 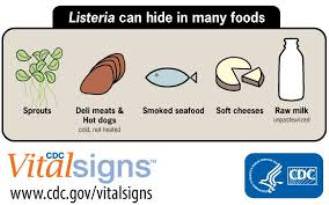