Mercury in Tuna? What are the Dangers?

The explosion of low carb diets has made canned tuna a go-to staple for many.  It’s high in protein, low in carbs and saturated fat, rich in micronutrients, and provides certain omega-3 fatty acids that the body can’t make.  And it’s generally pretty inexpensive.  But did you know that canned tuna is the most common source of toxic, heavy metal mercury in our diet? In fact, canned tuna accounts for around half of the mercury contamination in the US diet.  And mercury exposure causes lowered thinking skills and memory in 300,000 to 600,000 thousand babies each year.  Because of the dangers, the EPA has recommended limits for eating fish commonly contaminated with mercury, especially for women of childbearing years and children.  They suggest:

Mercury gets released into the air mainly through burning coal and oil for power. This mercury then gets deposited into the water and is absorbed by fish and other organisms and converted to methylmercury.   So what makes tuna so bad?  Some tuna, such as albacore, bigeye, and yellowfin are bigger and live longer, so they have time to accumulate more methylmercury in their bodies.  Smaller, shorter lived tuna (like skipjack) absorb and accumulate less methylmercury.

What are the dangers?

Studies have shown that methylmercury is highly toxic. Infants exposed to high amounts of methylmercury during pregnancy can have severe disabilities, such as mental retardation, seizure disorders, cerebral palsy, blindness, and deafness. At much lower doses, infants might appear normal during the first few months of life but might later display problem such as IQ deficits, abnormal muscle tone, lowered motor function, attention, and visuospatial performance.  In adults, too much mercury can cause itching and burning skin, pink cheeks, and swelling in certain parts of the body. In more serious cases, mercury poisoning can cause high blood pressure, low cognitive function, blindness, and lung and kidney disorders. 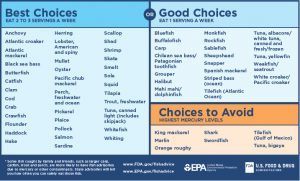