No Source Yet for New Salmonella Outbreak

A “rapidly growing” Salmonella Newport outbreak is under way, but no one knows the source.  On July 24, the Centers for Disease Control (CDC) reported that a total of 212 people from 23 states have been infected with Salmonella with a total of 31 hospitalizations.  Oregon and Utah have reported the highest number of cases, with Michigan, Montana, and Arizona following closely behind. Alarmingly, the CDC says they have not yet identified the source of the outbreak.  “A specific food item, grocery store, or restaurant chain has not been identified as the source of infections.”

Symptoms of a Salmonella infection primarily include diarrhea, fever,  and stomach cramps.  Some people may also have nausea, vomiting, and a headache.  Symptoms can begin anywhere from 6 hours to 6 days after becoming infected.  According to the CDC, Salmonella can be found in many foods, including sprouts and other vegetables, eggs, chicken, pork, fruits, and even processed foods, such as nut butters, frozen pot pies, chicken nuggets, and stuffed chicken entrees. Contaminated foods usually look and smell normal.

To prevent Salmonella infection, the CDC recommends that consumers wash their hands and surfaces often; separate foods that will not be cooked before being eaten from raw meats; cook meats at a high temperature; and refrigerate perishable foods within 2 hours. Individuals with symptoms of Salmonella should talk to a health care provider; create a list of foods they consumed the week the symptoms began; report their illness to the local health department; and assist public health investigators if they reach out.

If you have symptoms of a Salmonella infection, report your illness to your local health department and talk to a healthcare provider. If you receive a call from your health department, please answer their questions about your illness and the foods you ate before you got sick. This information is vital for public health officials to identify the source of this outbreak and to take steps to prevent additional illnesses. 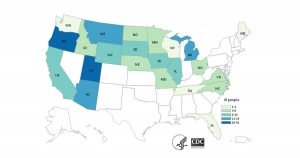