Shocking amounts of lead found in baby food.  According to research done by the Environmental Defense Fund, baby food contains dangerous amounts of lead.  The study looked at data collected by the FDA from 2003 to 2013.  Researchers looked at the statistics for baby food in particular because infants are most at risk for developing problem from consuming lead.   They found:

There are no safe levels of lead. Still, half a million children currently have blood lead levels high enough to trigger a public health emergency. Lead exposure in infants and children disrupts brain development, causes behavioral problems, and reduces IQ.  27 billion dollars a year in earnings is lost because of the effects of lead. 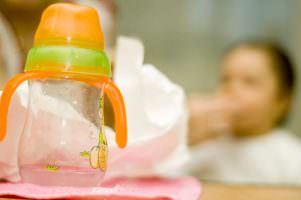 Most lead exposure in children, however, comes from contaminated soil and dust in the home.  21% of all homes in the US still have lead based paint dangers.  4 million households have children being exposed to dangerous levels of lead. The second highest risk to children comes from their food.  For infants, the risk is from the water used to mix their formula being contaminated with lead.  Meanwhile, the FDA says they are continuing to try and limit the amount of lead in food.  “The agency is in the process of reevaluating the analytical methods it uses for determining when it should take action with respect to measured levels of lead in particular foods, including those consumed by infants and toddlers.”