Shopping Carts Have More Bacteria Than What?!

Disinfecting wipes in the shopping cart area of grocery stores are a common sight.  And there’s good reason for you to reach out and use them. A study done by researchers at the University of Arizona found fecal bacteria on 72 percent of 85 shopping carts randomly tested across the US. A closer look at the samples from 36 carts turned up E. coli, Salmonella, and Campylobacter.  In fact, they found more bacteria on the shopping carts than in the bathroom of the store.  There was, on average, 361 times more bacteria on the cart than on the bathroom doorknob!   Another major source of bacteria inside the grocery store is the handle on the freezer doors.  More bacteria than on a used dog toy.  Along with the bacteria to worry about, the common cold and flu viruses can live on hard surfaces for anywhere from two to eight hours.

What can you do? 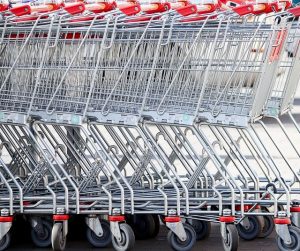 Here are a few tips to protect yourself — and your food– from all that bacteria.

Use the wipes the store provides to thoroughly wipe the cart handle and seat area.  If the store doesn’t have wipes, bring your own.  Travel sized packages of disinfecting wipes can be dropped down in a purse or your reusable shopping bag.  And don’t forget to wipe down the small basket you use to pick up just a few items. In order to sanitize with wipes you should be thoroughly wet the surface areas (handles, grates, coffee cup holders) with the wipes and leave the surfaces wet for up to four minutes. Properly using the wipes can remove over 99 percent of germs.

The plastic bags provided by the market are there for a sanitary reason.  Use them!  You can use the plastic bags as a glove to pick up your raw fruit, vegetables, and meats.  Then put the food in a plastic bag or clean reusable bag you’ve brought from home to protect them from any bacteria or virus that may be living in the cart.  Campylobacter and E.coli bacteria has been proven to grow on the outside of meat packaging, so always put it in a bag by itself so it cannot come into contact with any other food in your cart.

You don’t eat at home or a restaurant until you’ve washed your hands (right?) so don’t do it inside the store either. If you have small children that can’t make the trip without food, bring snacks from home.  Don’t be tempted by the free samples some stores provide.  The preparer may be wearing gloves, but are all the people who’ve been breathing, coughing, sneezing all over the counter? Stay away.

Do not let small children put their mouths directly on any part of the cart, and try to keep them putting their hands, or anything else, into their mouths while in the store. Wash their hands as soon as possible after leaving.  This can be difficult, so carry wipes or sanitizer as a next best option.

Try to avoid touching your face during or after shopping until you’ve had a chance to thoroughly wash your hands.  This can prevent transfer of viruses or bacteria into your nose or eyes.

Shop early and at smaller markets  Fewer shoppers mean fewer people to spread things on the carts.  And carts in small, upscale markets were found to have significantly less bacteria than superstores or budget grocery stores.  The worst store for nasty carts?  Traditional grocery stores had more bacteria – and more harmful, antibiotic resistant bacteria0 than any other type of store.

Last, but not least, 50% of touchscreens at the checkout counter test positive for fecal bacteria.